Wilderness Medicine Hot off the press Clean Cutting in the Wild

Clean Cutting in the Wild

One problem with the medicine in the wilderness is the obvious issue of sterilization.  It is pretty much expected that if you go on a 10 day hike you are not going to be showering and your normal glowing self on a daily occasion, but what if you as the team medic need to perform a minor surgical procedure unexpectedly?  Do you just forgo sterilization, or maybe run some water or alcohol over your knife and pray for the best?

A paper just published online written by Randy Knox, Samandra Demons and Cord Cunningham looked at this question and came up with a new way to handle decontamination of surgical tools used in the wilderness.  In their study they used 5 groups of surgical instruments, 4 that were inoculated with bacteria and one vacuum-sealed control.  The 4 experimental groups were then split up: one group was packaged with no intervention, the remaining three wre scrubbed with chlorhexidine.  Of those three, one was just placed into a package, one was irradiated with UVC light then put into a package, and the last was put in a package and then irradiated with UVC light. 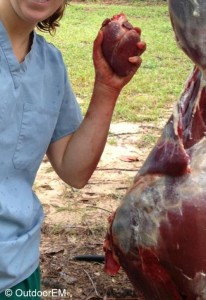 Their results show that the any of the groups which used chlorhexidine scrubbing were acceptable for sterilizing the equipment, whether or not UVC light was used.  When done before bagging, the UVC irradiation decreased the bacteria count from 99.9% cleared to 100% cleared.

So what does this tell us?  If you are going into the wilderness and want to be prepared to do a minor surgical procedure, the best way to ensure you have sterile instruments is merely to scrub your tools with chlorhexidine and place them in a vacuum sealed bag for transport.