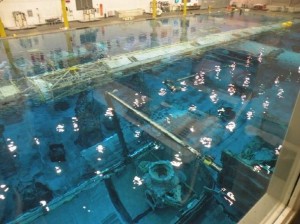 Vision changes have been observed in astronauts for many years following both short and long duration spaceflight.  These changes occur more commonly than could be blamed on the previously used explanation of the normal myopic changes of the aging population that entered space.  The most prominent change is a decrease in acuity that can be remediated with corrective lenses, allowing the astronauts to remain fully functional.  This acuity shift can persist for an extended time period after returning to earth, and in some cases can be permanent.  It has become more and more evident that the visual changes seen in astronauts are from actual physical changes in the eye that include various contributions of optic nerve sheath distension, posterior globe flattening, optic disc protrusion, increased OND, and greater concavity of the pituitary gland with posterior stalk displacement.

The causal factor behind these changes has not been concretely demonstrated, but is believed to be at least in part due to the cephalid fluid shifts, due to the loss of hydrostatic gradients normally set by gravity, causing increased intracranial pressure.  Optic nerve sheath distension has already been shown to correlate to intracranial pressure, however has the disadvantage of no elastic hystersis, meaning that a subsequent decrease in ICP does not correlate well with a timely reduction in optic nerve sheath diameter.  The hunt is currently underway for an accurate and precise method of non-invasively measuring the intracranial pressure of astronauts while in space in order to understand the pathophysiology behind these and other changes.   Potential contributing factors also include the increase levels of CO2 exposure that astronauts encounter while in space, the increased sodium in the diet of an astronaut in-flight and increased ICP due to resistive exercises developed to counter the bone loss and muscle atrophy seen in space.